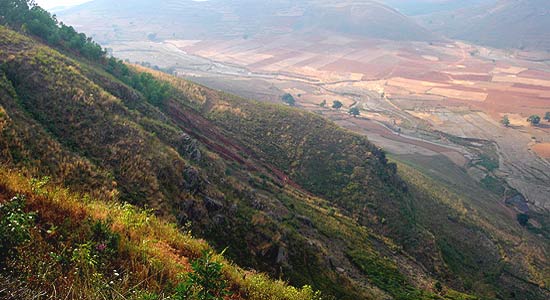 Forsaken god: Will someone tell Copenhagen, leave the bauxite in the mountain
essay
Mr Chidambaram’s War
A math question: How many soldiers will it take to contain the mounting rage of hundreds of millions of people?
Arundhati Roy

The low, flat-topped hills of south Orissa have been home to the Dongria Kondh long before there was a country called India or a state called Orissa. The hills watched over the Kondh. The Kondh watched over the hills and worshipped them as living deities. Now these hills have been sold for the bauxite they contain. For the Kondh it’s as though god has been sold. They ask how much god would go for if the god were Ram or Allah or Jesus Christ?

▲top
A Letter To The Economist
'Sometimes they say the Free Market provides a level playing field -- but then when questioned, they ask us to wait for Trickle Down. But things only Trickle Down slopes don't they?'
Arundhati Roy

To the Editor
The Economist

This is with regard to the review of my book Listening to Grasshoppers that appeared in The Economist. If this letter is long, ironically it is because the factual errors in the review are so many. In an attempt to highlight my "flawed reporting and incorrect analysis" the reviewer makes some extraordinary errors and leaps of logic:

PTI Unheard: A protester outside a ransacked house in Lalgarh
essay
Democracy's Failing Light
Is democracy a hit with humans because it mirrors our myopia?
Arundhati Roy
While we're still arguing about whether there's life after death, can we add another question to the cart? Is there life after democracy? What sort of life will it be? By democracy I don't mean democracy as an ideal or an aspiration. I mean the working model: Western liberal democracy, and its variants, such as they are.

So, is there life after democracy?
(繼續閱讀...)

The TRP unworthy: The deaths at Bombay's true icon, VT, didn't matter to TV; those at Taj did
essay: terror in mumbai
9 Is Not 11
(And November isn't September)
Arundhati Roy

We've forfeited the rights to our own tragedies. As the carnage in Mumbai raged on, day after horrible day, our 24-hour news channels informed us that we were watching "India's 9/11". And like actors in a Bollywood rip-off of an old Hollywood film, we're expected to play our parts and say our lines, even though we know it's all been said and done before.

As tension in the region builds, US Senator John McCain has warned Pakistan that if it didn't act fast to arrest the 'Bad Guys' he had personal information that India would launch air strikes on 'terrorist camps' in Pakistan and that Washington could do nothing because Mumbai was India's 9/11.

The fort that has never been attacked. Built by the Hapsburgs in 1833, it is believed the Nazis hid the gold they looted during World War II here
short story
The Briefing
Arundhati Roy's first work of fiction since The God of Small Things in 1997 is an allegory, a powerful fable about Climate Change, the War on Terror and Corporate Raj
Arundhati Roy
My greetings. I'm sorry I'm not here with you today but perhaps it's just as well. In times such as these, it's best not to reveal ourselves completely, not even to each other.

If you step over the line and into the circle, you may be able to hear better. Mind the chalk on your shoes.
(繼續閱讀...)

Gujarat 2002: Can goofy secularism combat organised hatred?
genocide
Listening To Grasshoppers
Genocide, Denial And Celebration
It's an old human habit, genocide is. It's a search for lebensraum, project of Union and Progress.
Arundhati Roy

I never met Hrant Dink, a misfortune that will be mine for time to come. From what I know of him, of what he wrote, what he said and did, how he lived his life, I know that had I been here in Istanbul a year ago I would have been among the one hundred thousand people who walked with his coffin in dead silence through the wintry streets of this city, with banners saying, "We are all Armenians", "We are all Hrant Dink". Perhaps I'd have carried the one that said, "One and a half million plus one".*
[*One-and-a-half million is the number of Armenians who were systematically murdered by the Ottoman Empire in the genocide in Anatolia in the spring of 1915. The Armenians, the largest Christian minority living under Islamic Turkic rule in the area, had lived in Anatolia for more than 2,500 years.]

"To love.
去愛
To be loved.
被愛
To never forget your own insignificance.
永遠別忘記自己有多微渺
To never get used to the unspeakable violence
永遠不要慣從於無法言喻的暴力
and the vulgar disparity of life around you.
以及你週遭對生命之不平等對待

New WorId Disorder
War is peace. So now we know.
by Arundhati Roy
In These Times magazine, November 2001

As darkness deepened over Afghanistan on October 7, the U.S. government, backed by the International Coalition Against Terror (the new, amenable substitute for the United Nations), launched air strikes against Afghanistan. TV channels lingered on computer-animated images of cruise missiles, stealth bombers, tomahawks and bunker-busting missiles. All over the world, little boys watched goggle-eyed and stopped clamoring for new video games. Afzal Hanging
'And His Life Should Become Extinct'
The Very Strange Story of the Attack on the Indian Parliament
Arundhati Roy
(繼續閱讀...)

▲top
'The Army Has To Come Out'
'The Indians are teaching the Americans, too, how to occupy a place ... The occupation of Kashmir has taken place over years. ... In Iraq, you have 125,000 or so American troops in a situation of war, controlling 25 million Iraqis. In Kashmir, you have 700,000 Indian troops fully armed there .. and creating a situation, making it worse and worse and worse.'
Amy Goodman ,  Democracy Now!

About This Site"Arundhati Roy" echoes loud and mightily through the halls of world literary pantheons. In October 1997, her novel The God of Small Things picked up Britain's prestigious Booker Prize, billowing up a storm of fame and infamy.

TITLE: The ethical subject of The God of Small Things. (Critical Essay)